Luma Mufleh, had just heard about the demise of her grandmother Munawar who was her lifeline to her family back in Amman, Jordan. Ever since she had decided to stay back in the United States after completing her education, her family had decided to cut off all ties with her. They would hang up on her whenever she would try calling home. Her grandmother was her only lifeline to her family, and with her passing away, Luma was feeling a deep sense of grief and loss.

Luma had her own way of grieving. When she was grieving, she liked to hop into her yellow Volkswagen Beetle, put on some energizing music, and just drive without thinking of a destination. She had just moved to Atlanta some time back and was still getting used to the roads. Driving around the roads of Atlanta and passing by stretches of shiny office buildings, mansions, and stretches of oldish row houses gave her an uplifting feel that she was discovering the essence of the city.

On one such drive, Luma found herself lost in a run-down area in Clarkston, a small town on the outskirts of Atlanta Georgia. As she explored the area, she found small stores of spices and goat milk cheese which was her favorite. She also noticed a group of children kicking sticks and stones, as they tried to play their own version of pick-up soccer. These children were so poor that they did not have anything else to play with. Upon enquiring, Luma found out that this was a refugee settlement town where the population comprised of refugees from war-inflicted countries of Somalia, Ethiopia, Afghanistan, and Bosnia.

Luma was passionate about soccer since childhood. Back in Jordan, she would watch boys play soccer on the streets. She often wanted to join them, but she knew that her family wouldn’t approve of it. When she moved to the United States to pursue her education, she was glad that she could play soccer at school. She enjoyed it and her most recent job in Atlanta, was as a coach of the fourteen-and-under girls’ soccer team, at Decatur-Dekalb, YMCA.

In the days that followed, she couldn’t get over the zest with which this diverse group of children at the refugee settlement was playing soccer. One day, she returned to Clarkston with a soccer ball and asked the boys if she could join them. The boys thought for a while. She was a stranger. But she also had a ball. So, they eventually agreed. She had a great time playing with them. She couldn’t help comparing them to the girls who she coached. While these boys barely had any resources, they had plenty of passion. They were looking for opportunities to play while the girls she coached were playing because they had to play. As a coach, she wanted to support their passion but wondered where she would get the time and resources to formally coach this group of boys. 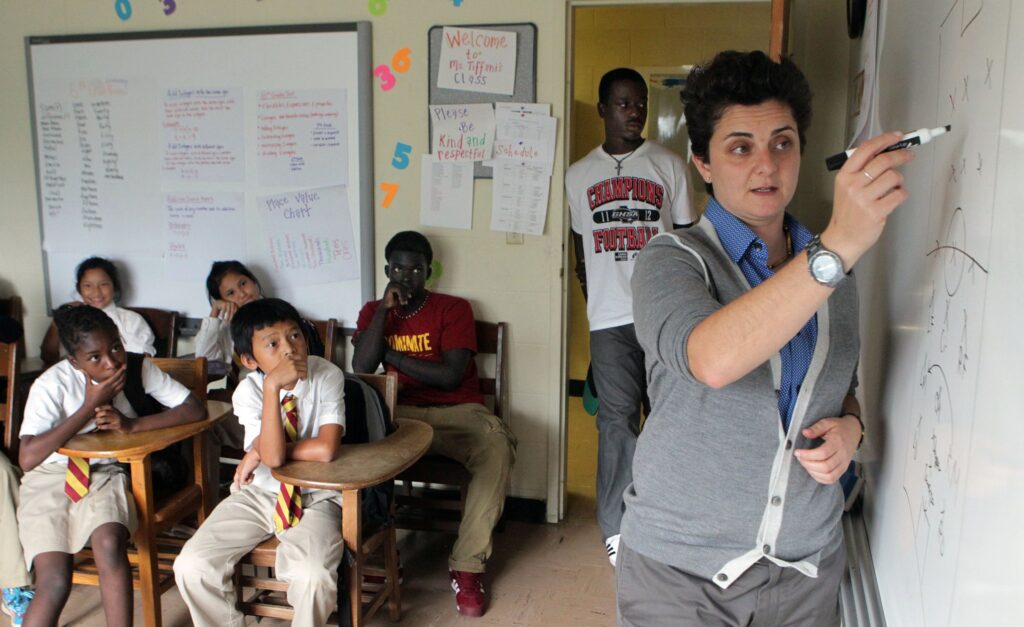 One day, she shared her idea of starting a soccer program for the refugees with the mother of one of the players of the team she was coaching. The mother happened to be on the board at the YMCA. To her surprise, YMCA agreed to sponsor the program and commit money for a field and equipment at the community center at Clarkston. Luma devoted a few hours every week to coach the children. She also started helping them academically, as many of their parents could not read or write English. In the years that followed, Luma founded a non-profit organization called Fugees Family, devoted to working with child survivors of war.

The children attend soccer practice twice a week, play games on weekends, and participate in tournaments. They have an after-school tutoring program, and a middle school called the Fugees Academy.

For her work with the Fugees Family, Luma Mufleh has been awarded the Diane von Furstenburg’s Peoples Choice award in 2018. She was the CNN Hero of the year in 2017. She is also the recipient of the Martin Luther King Jr. Community Service Award, the Smith College Medal, and the Common Ground Award presented to honor accomplishments in conflict resolution, peacebuilding, and community building. She has been honored with the Foreign Language Advocacy Award in 2009 for her work in the space of integration of refugees in the U.S.

To me, Luma’s story is insightful and inspiring in many ways. Her independent spirit and her confidence to walk her own path are among the traits that I find most inspiring. There are three powerful ways of thinking that this story brought up for me:

As we live through a phase of constant change, uncertainty, and volatility, sometimes it feels like the noise around us is taking away our ability to listen to our inner voice. It is inspiring to see those who are able to cultivate and strengthen their ability to listen to their inner voice by finding time for solitude and silence that brings the stillness through which our inner self can communicate with us. The potent combination of silence and solitude helps create the inner environment that calms our mind. It could be a drive around the town like Luma, or a quiet cup of tea while watching the Bangalore rains, standing by the window – whatever it is that brings the quietude that dissolves worry and anxiety and allows our inner voice to bring in the clarity that we need at the moment.

Would love to hear,