Jataka tales are said to be past life accounts of Buddha. There is a Jataka tale about Boddhisattva (the future Buddha), living as a gardener, and taking the decision to give up his worldly life and follow the spiritual path.

Soon after he makes the decision, his eyes fall on a spade lying nearby.  He decides to pick up the spade and do some last bit of gardening. He gets so engrossed in gardening that he forgets all about his spiritual quest.

He loses track of time, until he gets exhausted and sits down to get some rest. He then realises that his attachment to his spade had pulled him back to gardening.  Once again, he decides to commit to his spiritual pursuits but the same cycle repeats – he sees his spade and decides to do just a bit of gardening, and soon gets pulled into being a gardener.

This happens six times. The seventh time, he tells himself, “ If I don’t follow my calling now, I never will”.

One evening, he walks to the river, takes a look at its calm and serene flowing water, turns his back towards it and then tosses his spade, over his shoulder, right into the river.

Elated with this realisation, he cries out, “I have won this battle! I have triumphed!”

Nearby, a king, who had bravely held the day on the battlefield and emerged victorious, heard this cry and thought to himself, “So, here’s a warrior who seems to have had a victory even greater than mine!”.  Keen to meet this man, the king leads his troops in the direction of the river.

“I was drawn here by the victorious cry of the brave warrior who just declared victory. Where is he?” asked the king.

The Boddhisattva responds, “It was me. I have conquered my own mind. Can any external victory compare with the victory of this battle within?”

As the king pondered on this question, the Boddhisattva levitates, rising cross-legged into the air, and shares the learnings and insights based on his multiple attempts to drop the attachment to his spade. Listening to him, the king and the soldiers decide to throw down their weapons and head towards the mountains. Soon the residents of the city join them too.

Like other Jataka tales, this one also aims at giving us a glimpse of how the struggle to give up attachments was as real for the Buddha as it is for us. Just like us, it took him several attempts to conquer his inner resistance to move forward towards what he truly wanted to pursue. One common theme in these tales is the inner struggle humans go through with their own shortcomings. This struggle is central to being human.

As counterintuitive as it may seem, the path to overcoming this struggle is often iterative and while it may feel like going around in circles, it is somewhere along the circles of these iterations that we find our inner transformation. These circuitous paths put us in touch with our attachments and compulsions over and over again – till will get a chance to ask ourselves some questions and explore our own stories: 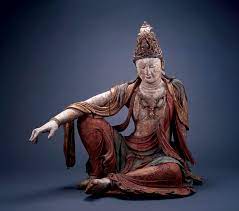 ust like Boddhisattva was attached to his role of being a gardener, we may be attached to a particular image of ourselves. Probably, we’ve been someone who has always said “yes” out of a desire to help and create value but over time the exhaustion of being available all the time and saying “yes” all the time has left us drained.  Somewhere deep down, we know that it’s time to “let go” of this pattern, but there is an intense tug of war because we do not want to let go of our image of being that helpful person who is always there to support. What if people don’t like us anymore? Or it could be our attachment to doing things all by ourself because we feel that delegating some bit may not create the same results as doing it all by ourselves. Or it could be an idea we had about running a project and any possible deviation from that idea may seem like treading in unfamiliar territory.

Fighting these patterns isn’t any easier than the gardener’s struggle to let go of his spade, but just like he kept at it, we too may be able to toss our spade into the river – one “no” at a time, delegating one task at a time and opening our minds to new ideas, one idea at a time. There is no hurry, because just like the gardener, we too have multiple attempts to prepare ourselves before we turn our back to the river and finally toss our spade over our shoulder.

Roshi Kapleau, one of the founding fathers of American Zen, who was an ardent vegetarian himself, would often counsel those wanting to embrace vegetarianism by saying “There is no need to force yourself to give up meat. At some point, it will give up on you”. Being gentle and patient with ourselves during this journey of letting go, allows us to take the time and space that we need to grow from one phase to another. The Gardener Sage’s tale is one such tale that invites us to explore our attachments that may be holding us back from growing into the new version of ourselves that awaits us at the horizon.