One February morning in 1916, two brothers Glenn and Floyd, eight and thirteen years old respectively, arrived early at school. The boys wanted to help the teacher by lighting up the coal stove to heat the classroom before the rest of the students arrived. On that particular day, someone had filled the container in the heater with gasoline instead of kerosene. When the boys tried to light the fire, the heater exploded. Both the brothers sustained severe burns. Floyd succumbed to the injuries and died, while Glenn survived.

Glenn’s burn injuries were so serious that the doctors recommended amputation. The chances of him ever walking again were ruled out. Glenn’s parents didn’t agree to the amputation. Deep down they wished and hoped that this injury would not define his future. With unshakeable faith, they massaged his legs to encourage the flow of blood. As an eight-year-old, hearing the doctor say that he would never be able to walk, sparked in him a desire to work towards regaining his ability to walk. So when his parents encouraged him to try and stand up to build strength and stamina in his legs, he gave it his best. And sure enough, with relentless effort, he was able to stand. Once he began to stand up, his parents began to encourage him to start walking. The effort and faith paid off and Glenn took his first step one and a half years after the accident.

Next, his parents encouraged him to pick up the pace and run so that he could play with his brothers and sisters. His parent’s encouragement and belief fuelled his spirit of not giving up. With steady exercise, his legs began to gain strength. He started racing with his siblings. One day, while passing by a store, he saw an advertisement for a mile race at a local fare. As he looked at the medals on the poster of this advertisement, Glenn began to dream of winning the race. After achieving his goals of standing, walking, and gaining enough strength to run, he now had his next goal – winning a race. Glenn surprised everyone by winning the race. This victory helped him discover his love for running, competing, and winning.  So, in high school, he joined the track team. His specialty became the mile run. Soon he was invited to an elite track meet in Chicago. Competing against the best of the best at this event, Glenn won this race too and set a record. He then went on to run for the University of  Kansas. He won his first big race, in 1932. This success won him a place on the US Olympics team. He finished fourth in this race. During the next few years, Glenn competed in several events and set many records – in 1933 he won the Sullivan medal, in 1934 he set the world record for the mile run, he set a world record in the 800 m race in 1936 and he finished second in the 1500m event at the 1936 Olympics.  The same year, he was voted “Most Popular Athlete” by his fellow Olympians.

He also set a personal best time in the mile run at Dartmouth College’s Alumni Gymnasium indoor track, in 1938. Cunningham has a park named after him in his hometown of Elkhart, Kansas. He was also known as “The Kansas Ironman” . He was adored by fellow athletes as well. Glenn also had a desire to support children and is also known for Glenn Cunningham Youth Ranch in Kansas, through which he and his wife helped thousands of needy and abused children.

The child who was once told that he will never be able to walk made his country proud by running miles. 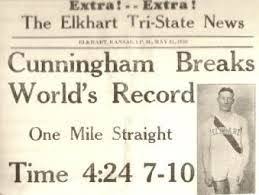 The fire that nearly killed him in childhood, sparked a fire within him to be able to stand, walk and run again.

When I came across Glenn’s story, it reminded me of  Nassim Taleb’s concept of being “antifragile”.  According to Taleb,  the resilient resists shocks and stays the same – the antifragile gets better. An example of an antifragile system is our muscular system. When we go to gyms and lift weights, we put pressure on our muscles to make them stronger. We see a similar phenomenon at a psychological level in cases of post-traumatic growth. Post Traumatic Growth is about growing through adversity. We can call it emotional antifragility. Tal Ben-Shahar, author and teacher of Happiness Studies at Harvard, often talks about the conditions that we can put in place to increase the likelihood of growing from hardship. His model to develop antifragility and gain happiness is called the SPIRE model.

As we navigate the uncertainty of life, phases of loss, pain, grief, fear, and helplessness show up at some juncture or the other. These phases of life often arrive with a jolt that shakes the very foundation of our hopes, dreams, and aspirations. There are times when we begin to question the fundamentals – like the whole point of our existence. But, what if, we could use these phases to grow stronger? The triad of Glenn’s story, Taleb’s concept of antifragility, and Ben-Shahar’s SPIRE show us the path to moving from adversity to growth. Not everything that happens may be for the best, but we can choose to grow stronger through it and explore the best in us as we grow through the situation.